Get fresh music recommendations delivered to your inbox every Friday.
We've updated our Terms of Use. You can review the changes here.

THE EYE OF THE ICOSAHEDRON 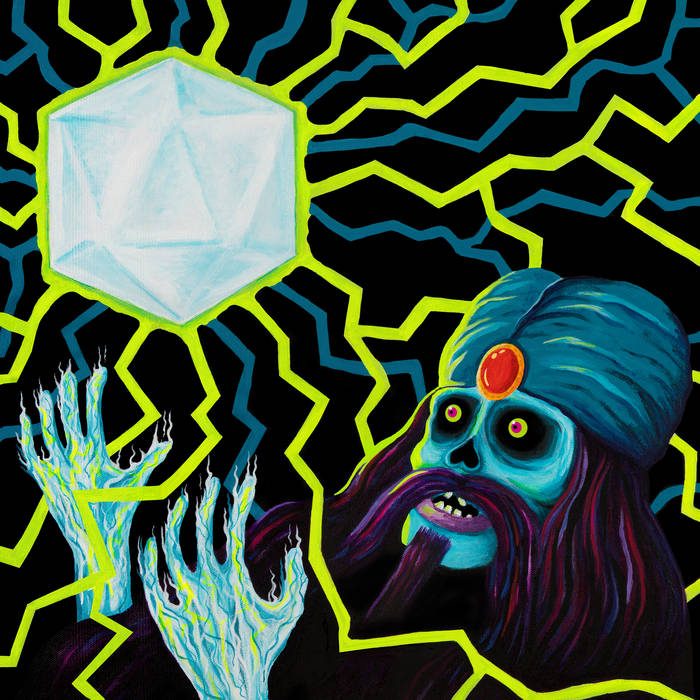 Meddlefan I dig this whole release. Put it on kick back and relax . Close your eyes and feel the flow.

Apocalypse Devotee I LOOOOVE THIS BAND! Heavy, Mysterious, & Occult!!! Sehr Gut! I really dig the Lovecraftian type mythos in the story. Excellent top notch original DOOM!👌🏻 As a Psychedelic Wizard myself I can attest to its Magikal nature.

Fistful of DOOM Holy Mesmeric Scintillations Batman! Dungeon Weed mastermind Dmitri Mavra has gone deep inside the mountain and returned with a brand spanking new concoction of weirdly intoxicating acidic psychedelic doom. This shit is seriously fucking good. Sell all of your earthly possessions (immediately if not sooner) and join the heady cult of Dungeon Weed today!
more...

READ THIS:
One thousand years. One thousand years alive.
Centuries pass like drifting leaves on indifferent wafts of time. Alive in decrepit solitude, alive with no end in sight. Unbearable bleakness day after day, interminable consciousness night after night, trapped in a never-ending nightmare life. A desolate millennium of wan awareness, power and strength mere shadows of the past. Caliginous thoughts drift beyond recognition while tenebrous winds chill my soul and the residuum of my heart. Dynasties rise and fall, there’s never any change, things just rearrange. This curse an unbearable weight.

Then one night it came to me, a vision in a dream. A damsel with a dulcimer, sang in an unknown tongue to me. Seven nights she came to me, Seven nights I dreamed, floating in a crystal sun that shined so bright I could hardly see. I could not understand any word, nor any phrase but one: The Eye of the Icosahedron.

These mesonoxian revelations weighed heavily on my thoughts. Drawing on the tattered remnants of my sorcery, I invoked the odious demon Y’ag Z'gyroth from the necrotic depths of the nether plane and commanded him to instruct me on the meaning of this mysterious phrase. In a loathsome voice the demon explained that it was a crystal of twenty sides, forged by the elder gods at the dawn of time and hidden deep in the Psionic Abyss, where mind is outside of time and time has no meaning.
“Look into the eye and see all twenty planes of reality,” Y’ag Z'gyroth croaked as it faded from sight.

I stirred myself to action despite the suffocating weight of a millennium. I procured the proper ingredients to mix a dream powder of sufficient potency to send me down into the blackest depths of my innermost consciousness. Soon I was sinking in a vast ocean of impenetrable thought and feelings that I could no longer comprehend. In the distance I saw a glowing door but I feared it would lead to the other side of my consciousness. Going down even deeper, spiraling through the fragments of dreams and memories that pass like falling stars, I had no choice but to step through the door. I did not know if I could survive to the other side. Like falling slowly in a dream down an infinite shaft of nothingness, cold and without meaning, from which nobody returns alive.

Within the Psionic Abyss, psionic vibrations no longer pulse, suspended in the uncaring void. But at last I had pierced the veil of liminal perceptions. They say no man who wants to live can return from this realm. I alone, he who cannot die, am the only one who can survive. I wandered the inner maze of the outer mind, lost among the infinite possibilities until at last, through dumb luck or the guidance of some unseen hand, I reached the center of the maze. There before me towered a cyclopean mountain of putrid slime, poisonous quivering ooze, a gelatinous vault of doom. I saw the crystal hidden inside, shining bright inside the beast. The Eye of the Icosahedron was nearly within my grasp. This was my very last chance, as the creature tried to feast upon my soul, I had nothing left to lose.

At last I gazed upon the shining stone, ensorcelled by its mesmeric scintillations. Now I could finally see all realities in these twenty shining facets, and all of them were me. My very own reflection is all that I could see, sitting in my chamber about to cast the spell that led me right to Orcus and one thousand years of hell.

Crashing through explosions of memories in reverse, a madman’s laugh of terror in every single verse. To live it all again, even in a flash, when all I really wanted was to forget at last.
Spinning through forgotten decades, falling through time, reliving living the millennium, psionic wormhole dreams go flickering by, anamnesis flashback vision blinding my mind’s eye.

I look around me, what do I see? A forgotten chamber and fallen dreams. From the time before the curse. From another time.
One thousand years alive, and yet all those years did not exist. The gods are laughing because they’re playing tricks. So much was lost in the flood of memories, like when you said that you would wait for me. Or that look upon your face at my return, at my disgrace.

I put the poison to my lips, to sleep forever is my only wish.

Bandcamp Daily  your guide to the world of Bandcamp

sndtrak stops by with an Album of the Day Feature of his most recent release, FLIPS V1: Triple Lindy